RANGE: These days, an all-too-common phenomenon in the attics and cellars of American homes (especially those owned or rented by hard-up, freelance writers) is the presence of Poltergeists. Uncanny ghastly special effects directed by these diabolical spirits are epidemic. Paltry Geists, smaller and less celebrated than their cousins the Poltergeists, haunt the rest of the house, kitchen, bathroom, bedroom, etc., and while their pranks are not nearly as spectacular or saleable to Hollywood as those of their relatives, they can be every bit as effective in driving normal citizens over the brink, into howling, gibbering, wild-eyed insanity.
HABITS: Let us consider a morning in the life of a mortal plagued by a Paltry Geist: your mysteriously reset alarm goes off two hours early or an hour late. If it is a clock-radio, it blasts Van Halen (you like classical) or the 1812 Overture (you like rock). Somehow, your arm got tucked in under you in the night and is now totally numb. As circulation returns, you have the sensation of being flogged with a bouquet of porcupines. Invisible hands cruelly manipulate the hot and cold shower controls—doubtless the same hands which presoaked the towels, used up the last of the toilet paper, and now knocks the toothpaste tube cap out of your fingers and wedges it perfectly into the drain of your (broken) sink. Some malevolent force has made off with a sock from each pair and knotted your shoelace with a wicked Sea Scout’s skill. In your effort to undo this knot, you break (a) a fingernail and (b) the shoelace. The phone rings. As you dash for it, you bang your shin sharply on a mischievously rearranged bit of furniture. The caller is, of course, a wrong number. Whatever spirit now curdles the milk as it enters your cup of coffee has also hidden your car keys. You get up to check your coat for them and smell toast burning—but why go on?!!
HISTORY: While every nation in Europe at one time boasted its population of mischievous “Little People,” the remarkably petty and tedious nature of the Domestic American Paltry Geist strongly suggests their Swiss origin. The Paltry Geist is descended from the fair people known as the Severan, merry pranksters of the French, Swiss, and Italian Alps who enjoyed putting the horse on the roof and punching holes in bags of flour. Upon their arrival stateside, they befriended an indigenous Trickster Spirit, known to the natives as Coyote. In the lore of many tribes, Coyote was held responsible for the practical jokes (famine, tornadoes, and later, anthropologists) which the Indians suffered. Between them, Paltry Geist and Coyote sprinkled flies in the buttermilk of many a pioneer housewife, spilled ink on final drafts of the Federalist Papers, and, in general, caused the random irritability for which the American personality is internationally famous.
SPOTTER’S TIPS: A full-fledged attack of Paltry Geists once temporarily impeded the presidential aspirations of candidate Richard M. Nixon. By blunting his razor and hiding his anti-perspirant on the day of his televised debate with JFK, they caused him to come across as a furtive slum-lord suffering delirium tremens. According to fairy historians, the way to tame a Severan was to remain calm and smiling despite his antics. Similarly, the Paltry Geist expects you to be able to “take a joke” with Zen-like good humor. As an alternative, you can always burn down your house. 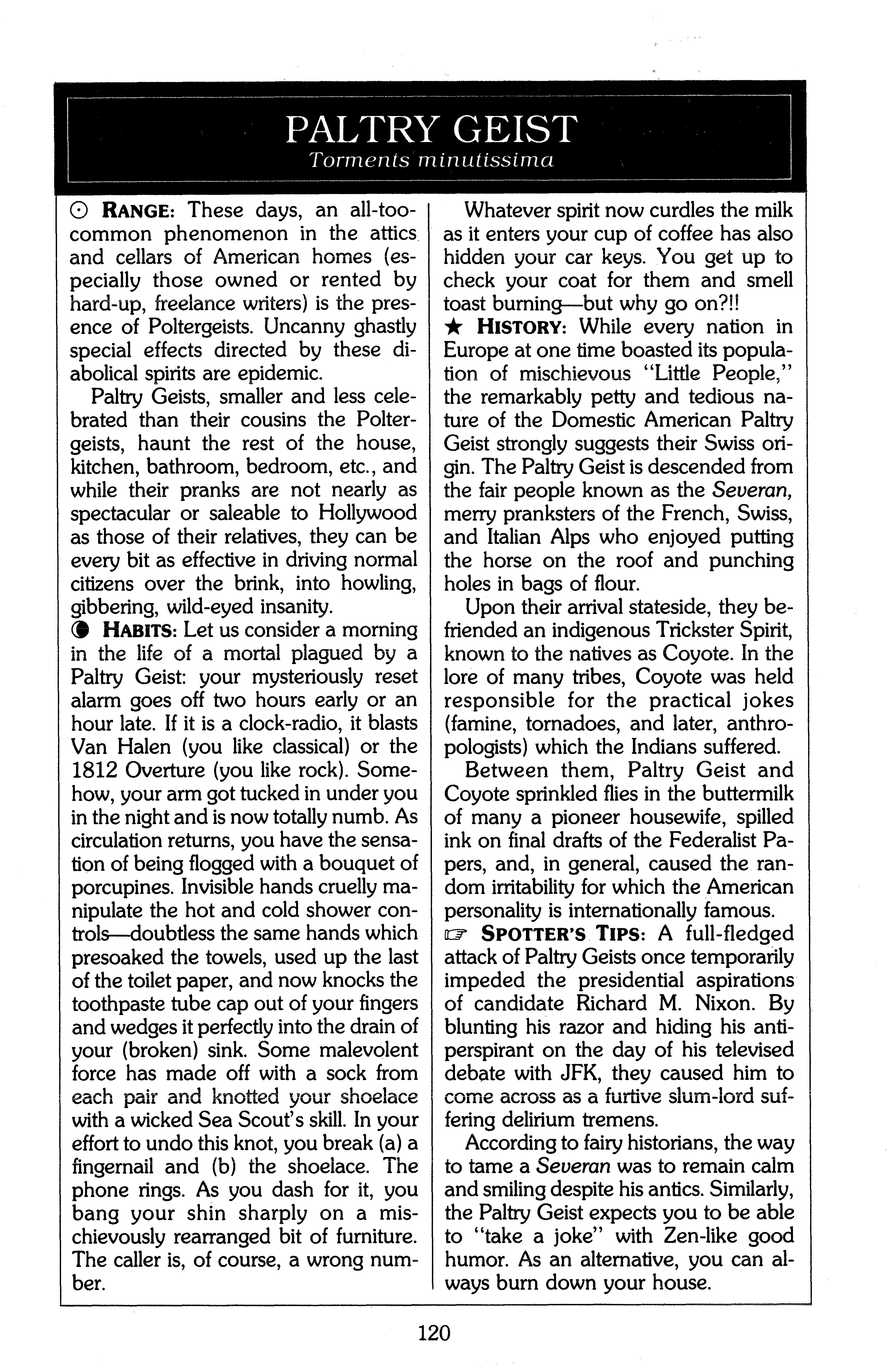