the secret 15 - The Secret Podcast

Silkies and Ke/pies, over the sea, beyond Skye, to a
Nova Scotia ….
Down ice green fjords of Scandinavia, and away to
the Land of the Eagle, then sailed the Ellefolk, in their
terrible-prowed lqngships: the Nissen and the Tom-
tra, those hairy farm-fairies; Grims from the stone
towers; squat, squinting Wood- and River-Trolls;
and, in the bows, faces set to the cold salt spray, the
Elves themselves, yellow hair streaming in the wind,
blue-gray eyes fixed on the far horizon. Of all the
folk of Jotunheim, only some of the Koboldes
stayed behind, and these proud Tree-Fairies were
soon and forever turned to wooden playthings for
the children of Man.
Guided on its stately way by the Rhine Maidens,
a great fleet bearing away strong-thewed Dwarfs
from the mines, plump and hairy Witchtln from the
fields, the handsome Wilden Fraulein from the
marshes, and red-capped Hutchen from the Black
Forest forsook Germany and her neighbors for the
New World, far across the sea.
Then from the East, from the Far Marches, from
the wide snowy Steppes and boundless fertile plains
of Russia-travelled the native Fair Folk: Vazily,
Poleviki, Domivye, and Vi/y. The Leshy abandoned
the forest tops of Tatary, the Rusyalki rose up from
the river beds, and all followed the Forest Fathers
and Moss Maidens across the winter prairie to the
Black Sea shore and onto waiting ships. Together
they emigrated, away to the West.
Cradling Italy, calm as the clouded moon, dark as 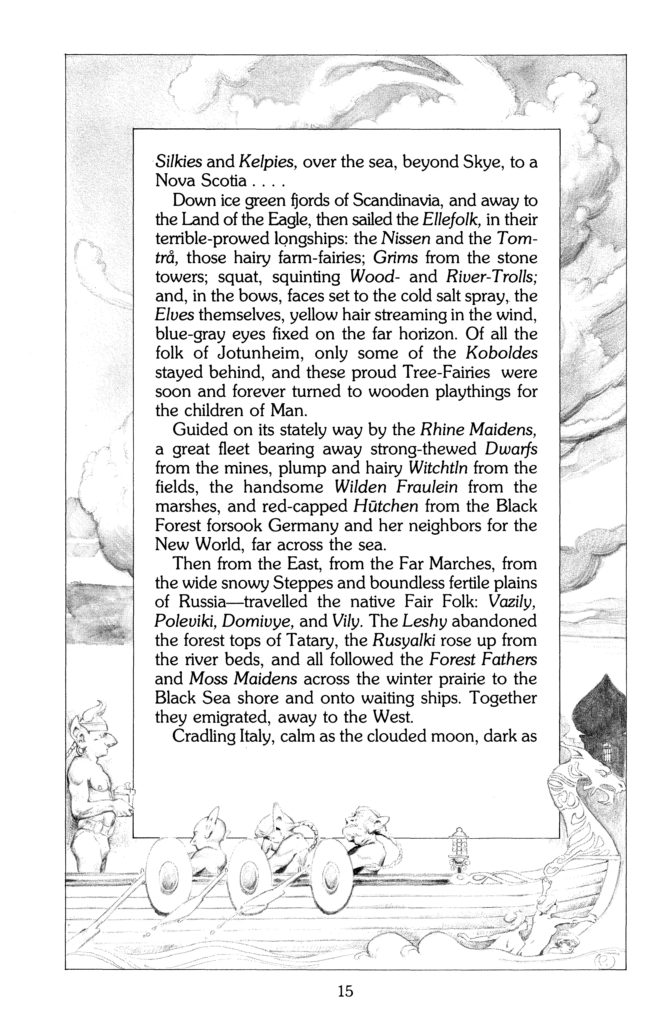