THE SCREAMING MIMI - The Secret Podcast

RANGE: These tiny terrors are actually “changelings”—wicked creatures
which the fairies swap for human babies. Screaming Mimis infest public
places: churches, fine restaurants, and the occasional concert. Their earpiercing
shrieks are inevitable on any public means of transportation, as well
—trains, buses, planes, and (especially) elevators. Although hideously
audible and appallingly visible to strangers, the Screaming Mimi appears to
members of its own family as a sweet chirping cherub.
HABITS: It is a curious paradox that while the birthrate of American
infants declines, the Screaming Mimi population is booming. Perhaps this is
because the minuscule monsters are most commonly seen and heard by the
“child-free.” The more child-free adults there are around, the more the
Screaming Mimi will be seen—and feared.
The Screaming Mimi’s full throated howls of outrage, boredom and
frustration are especially upsetting when they occur, as they most often do, in
outrageously boring and frustrating situations. (See “Range,” above). For
shamelessly expressing what the rest of us actually feel, Mimi draws a lot of
dirty looks.
To all but its mother, the most horrible aspect of the Screaming Mimi’s
behavior is its vampire-like quality. Believe it or not, those haunting,
unearthly, nocturnal wails signify the creature’s desire to fasten its mouth
upon the breast of a mortal woman and extract the life-giving fluids!
HISTORY: This fiend-in-infant-form first appeared in the cradles of Olde
England. This may account for the Anglo-Saxons’ preference for the
companionship of dogs and their habit of belaboring the buttocks off their
offspring with flails, canes, and stout oak cudgels.
To the thatch-brained serfs of Britain, the Screaming Mimi was known
as a “Changeling.” In America, it is often diagnosed as hyperactive.
Numerous Screaming Mimis yowling in the homespun cribs of the
thirteen original colonies inspired Daniel Boone, Lewis and Clark, and other
pioneer patriarchs to explore the West. Anything to get out of the house.
SPOTTER’S TIPS: In addition to its characteristic noise, a certain odor is
often an indication of the Screaming Mimi’s presence. It’s a sort of ammonialike
aroma, alone or accompanied by a dark, heavy sulphurous scent not
unlike that of English cooking.

This Screaming Mimi needs Changeling. Mother wishes the stork would take
her back. 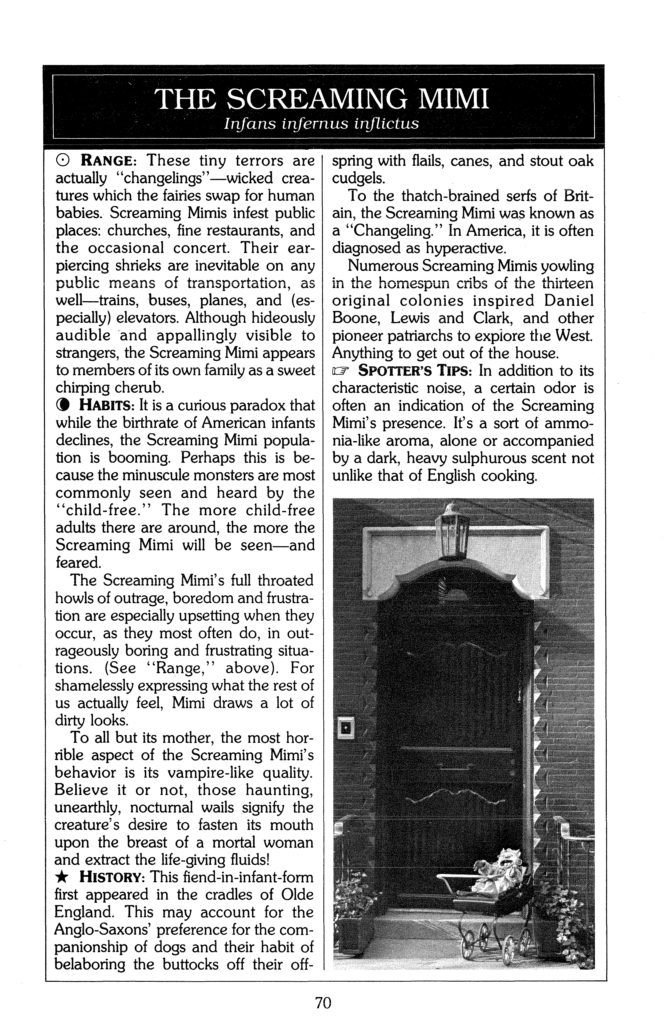